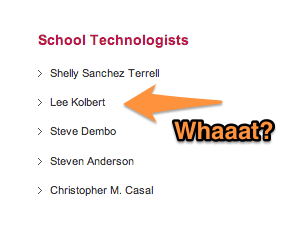 Wow! What a surprise to find my name listed among the finalists for this year's Bammy Awards.
A sincere "thank you" goes to those of you who not only nominated me, but also voted. I appreciate the confidence you have in me. To be honest though, I don't expect to win; especially seeing the other educators in my category. I know them. They are incredible. I am not worthy. Hey, even I wouldn't vote for me to win!

So, even though I'm not going to win I am still very excited about the Bammy Awards and the fact that educators are (finally) getting the notice and recognition they deserve. The Bammy Awards are all about what's right in education. Read on:

The Academy of Education Arts and Sciences has announced the final list of candidates for the second annual interdisciplinary Bammy Awards recognizing the contributions of educators in 23 categories across the field. The radically diverse and eclectic list of candidates includes teachers, principals, superintendents, school nurses, education advocates, researchers, early childhood specialists, education journalists, education school professors, school board members, education bloggers, parents and other members of the broad education community. New to the list for 2013 are school librarians and school technologists. The Bammy Awards’ nomination process began in April and ended on May 15th. Nominations were accepted in 32 categories across the education field. During the week of May 17th through May 24th, the Council of Peers, members of the Academy of Education Arts and Sciences, voted by secure and anonymous online ballots on 351 nominees submitted from across the nation. Five finalists were selected in each category.

Finalists include both well-known and lesser-known (that's me) members of the education community. The results of the votes cast by the Council of Peers were computer-tallied, entered into finalists’ ballots and are being sent to the Academy’s Board of Governors, who will vote to determine who will receive the Bammy Award for 2013 in each of the 23 categories that qualified. The full list of finalists in all categories can be viewed here.

The Bammy Awards were created in response to the relentless national criticism of America's public schools. The negative perception of public education has led to a decrease in public confidence, calls for reductions in financial support and intense scrutiny of educators, while all that is right in American education is largely ignored. Based on the notion that it takes a village to educate a child, the Academy identifies, recognizes and celebrates the contributions of education professionals, para-professionals and support staff across the entire field -- from teachers, principals and superintendents to school nurses, advocates, researchers, early childhood specialists, education journalists, facilities maintenance staff, special needs professionals, school board members, parents and more. The Bammy Awards acknowledge that teachers can't educate children alone and don't do it alone. The awards aim to foster cross-discipline recognition for the vital role played by every member of the education village, encourage collaboration and respect across the various domains, elevate education and education successes in the public eye, and raise the profile and voices of the many undervalued and unrecognized people who are making a difference in the field every day. “This matters because it’s an organization that realizes that it takes a village. Education is a cooperative effort among a whole group of forces; it doesn’t happen unless everybody works together and so it’s really an honor to be singled out by a group like this,” commented John Merrow, PBS education correspondent and 2012 lifetime achievement honoree. Modeled on the broad scope of the Oscars, Grammys and Emmys, the Bammy Awards are presented by the Academy’s Council of Peers and Board of Governors. The Academy accepts nominations in dozens of disparate categories, selects honorees, and brings together constituents from the entire education community to recognize the honorees.

To learn more about the Bammy Awards, go to www.bammyawards.org.