How to Better Engage Students in Science Education

This came across my email this morning and after not posting on my blog for what feels like years, it stirred me to want to share again. 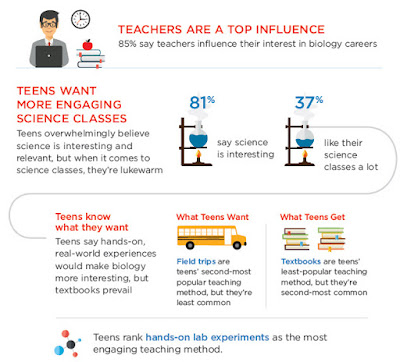 The Amgen Foundation, in partnership with Change the Equation, released results of a new survey examining what motivates U.S. high school students to pursue a STEM education. The survey findings, titled, “Students on STEM: More Hands-on, Real-World Experiences” shares some key perceptions that teens have of STEM education.
Based on the survey of 1,569 U.S. students ages 14 to 18, in addition to the critical role teachers’ play in stimulating students’ interest in STEM, students also need hands-on, real-world experiences to inspire them to explore careers in scientific fields. Specifically, below are some key findings:
·         Among teens who are interested in biology careers, teachers (85 percent) and classes (86 percent) rank right alongside their parents or guardians (87 percent) as the biggest influences on their career decisions.
·         Eighty-one percent of students are interested in science, but only 37 percent of teens said they like their science classes “a lot.”
·         Two-way, hands-on learning, like experiments and field trips, are most likely to engage students in biology, followed by tools that help them relate biology to real life. Methods such as class discussions or teaching straight from the book are least interesting, but among the most common.
·         In fact, roughly half (51 percent) would sooner help a famous scientist run a biology experiment than try out the latest smartphone.
According to the U.S. Department of Education, there is a projected significant increase in STEM jobs that will need to be filled by 2020. For example, biomedical engineering jobs are projected to increase by 62 percent from 2010 to 2020. Given these figures, it is imperative that students get the right opportunities and experiences to encourage them in the STEM fields.

Teachers Are Critical to Inspiring a Lasting Interest in Science

The survey found that large majorities of teenagers like science and understand its value, but common teaching methods, such as teaching straight from the textbook, do not bring the subject matter to life in the same way hands-on, real-life experiences do. Several results reveal an opportunity to better engage students in the classroom. For example:
·         Eighty-one percent of students are interested in science, and 73 percent expressed interest in biology. However, only 37 percent of teenagers said they like their science classes “a lot.” By contrast, 48 percent reported liking non-science classes “a lot.”
·         Among teenagers who are interested in biology careers, teachers (85 percent) and classes (86 percent) rank right alongside their parents or guardians (87 percent) as the biggest influences on their career decisions.
·         Two-way, hands-on learning, like experiments and field trips, are most likely to engage teenage students in biology, followed by tools that help them relate biology to real life. One-way communication, such as class discussions or teaching straight from the book, are least interesting, but among the most common.
“We are in an era where scientific advances provide the opportunity to make meaningful progress against some of the world’s most serious diseases,” said Raymond C. Jordan, senior vice president of Corporate Affairs at Amgen and Amgen Foundation Board of Directors member. “To sustain this momentum, we must inspire the next generation of innovators. Through this study, we have seen that teachers are critical catalysts to inspiring a love of science in students.”
The survey also looked beyond the classroom, revealing that most teenagers lack access to additional resources and opportunities to learn more about scientific careers and engage with science professionals—experiences that are critical to developing a lifelong love of science. For example:
·         Most survey respondents believe knowing an adult in their field of interest would be helpful, but only 32 percent actually know an adult in a science-based career. And just 22 percent know someone with a job involving biology.
·         Only 33 percent of teenagers have ever been involved in a science club or group, either in or out of school. Low-income teenagers are especially unlikely to have been involved, and are more likely to be unaware of extracurricular science offerings.
·         Low-income students also have the fewest pathways to science careers. They are less likely to know someone who works in biology (19 percent versus 25 percent of higher-income students) and not as likely to have access to career-planning resources.
“Students who pursue a STEM education today are the innovators who will solve the world’s greatest problemstomorrow, whether or not they become scientists or engineers,” said Linda P. Rosen, chief executive officer of Change the Equation. “Change the Equation is pleased to partner with the Amgen Foundation to help uncover how we can ensure all U.S. students, regardless of income level or location, have access to the right resources.”
To expand youth access to the nation’s best STEM education opportunities, CTEq maintains the STEMworks honor roll of programs that have proven their impact through rigorous third-party review. Over the past two years, CTEq’s state and corporate partners, including the Amgen Foundation, have rallied around STEMworks programs, bringing them to almost 1 million more youth nationwide.
To help science teachers give their students more hands-on learning experiences and insight into career options in and out of the classroom, the Amgen Foundation created the Amgen Biotech Experience. This program provides professional development training to teachers and state-of-the-art equipment to schools, bringing real-life biotech experiments into the classroom.
For more information about the survey, visit amgeninspires.com/studentsonstem and join the conversation using#TeensTalkSci. Visit AmgenInspires.com and follow @AmgenFoundation to learn more about our commitment to inspire the next generation of scientists. For more on CTEq, visit changetheequation.org and follow@changeequation.

The research was commissioned by the Amgen Foundation and Change the Equation and conducted by C+R Research Services, a national marketing research firm that specializes in research with youth. A total of 1,569 online surveys were completed by students ages 14-18 years old. Participants were high school students (sophomore, junior and senior levels) currently attending public and private schools in the U.S. Hispanics and Blacks/African Americans were oversampled to ensure adequate representation, and the data was weighted by ethnicity and region to mirror the U.S. population. Data collection took place November 2015. For the full methodology, visit changetheequation.org/students-on-stem.

About the Amgen Foundation

The Amgen Foundation seeks to advance excellence in science education to inspire the next generation of innovators, and invest in strengthening communities where Amgen staff members live and work. Since 1991, the Foundation has donated more than $250 million in grants to local, regional and international nonprofit organizations that impact society in inspiring and innovative ways. The Amgen Foundation brings the excitement of discovery to the scientists of tomorrow through several signature programs, including Amgen Scholars, Amgen Biotech Experience, and Amgen Teach. For more information, visit AmgenInspires.com and follow us on Twitter@AmgenFoundation.

About Change the Equation

Since 2010, Change the Equation has been championing the value of a good start through K-12 STEM education as a means to build and inspire the next generation of America’s workforce. The nonprofit CEO coalition works at the intersection of business and education to ensure that all students are STEM literate by collaborating with schools, communities and states to adopt and implement excellent STEM policies and programs. For more information, visit changetheequation.org and follow us on Twitter @changeequation.
Images: http://www.amgeninspires.com/

Thank you for the article. Practising in learning science always makes the student love science more.
Remembering when I was a student, I like practising a lot, experiment in lab, collect plants for a sample project...
gmail email login