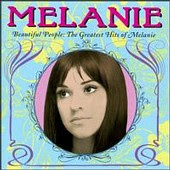 My, how things have changed!

My very first live concert was in 1974. Folk singer, Melanie, played in Central Park, NY. My sister took my friend, Missy and me. I mostly remember the smell of pot and people holding up lots of little lights. The use of cigarette lighters at concerts reportedly began with Melanie, who played at Woodstock in 1969 and was inspired to write "Lay Down (Candles in the Rain)." The song became a top 10 hit the following year and spurred fans to hold up their lighters at her shows. I remember thinking how beautiful it was seeing thousands of people waving a tiny light in the air in total darkness.

I hadn't thought much about it since... until Friday night, when I took my son to the Blue Man 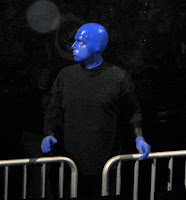 Group concert in Fort Lauderdale. I've seen BMG before in NYC and absolutely loved the show. This show though, was even better and surprisingly, different. It was much more of a rock concert, hence the title, "How To Become a Megastar" tour. Aside from the really great music, I was struck as to how 21st century this concert was. Their use of the video screens was not only to magnify what was on the stage but they used the video screens to tell their story. Their story being mostly a critique of information overload. The show starts with Blue Man #1 grabbing a webcam and aiming it at himself and others on the stage. He jumps into the audience and aims it at audience members, at one point, with the help of some creative video manipulation, he even goes deep inside an audience member's mouth, down his esophogus, into his stomach, out his... well you can imagine. I don't want to ruin the effect and truly I couldn't do justice to how well it was all put together here in text, which is why they didn't just tell it to us either. Their use and manipulation of digital video was another example of how today's audiences are totally engaged on a more technical level.

At one point during one of BMG's songs, that same familiar flicker of lights spread throughout the audience.

The difference though, was there were no lighters. Instead, audience members were holding up their cell phones. Thousands of backlit cellphones, waving in the air, back and forth, to the music. Melanie would be proud!