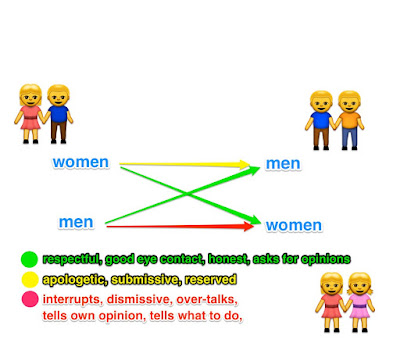 These observations are gleaned from my work environment, as well as from other business environments of which I've had the privilege to take part over the years. To be fair, there are certainly exceptions in every environment.  The men and women who treat each other in a truly professional manner, are the superstars of most organizations. They are easy to spot and people tend to gravitate toward them. Others want to be around them, people want to learn from them, and they emit an energy of confidence, strength, and others feel safe in their presence. They are the opposite of the "energy suckers." You feel good when you are around them and you're not afraid to fail. You know if you do fail, you'll be coached to succeed in the future. Why? Because these people have confidence in your ability, and most of all, they are not threatened by your presence.

On the other hand, there are plenty of men (and women) who are threatened by the presence of strong personalities. So, those of us who are on the receiving end of this dysfunction, tend to apologize and make every effort to help everyone else save face.

So, although there are plenty of exceptions, there are not enough exceptions to water down the fact that our culture of how men treat women is sexist, and we allow it to continue. As poor as the behavior is of the men who are demeaning to women, it is the women (and other men who bear witness) who allow it to continue. We must take responsibility for allowing people to treat us as they do.

We live in a culture where we permit bad behavior to continue. Rather than address the problems head-on, we adjust our own behaviors in order to avoid the discomfort. Similar to bullying, bystanders are less likely to jump in and say something for fear that they will become a part of the situation and potential target for the bully, as well.

And that's where the misplaced apologizing usually surfaces.

In 2012, The Women’s Media Center (WMC) which was co-founded by Jane Fonda, Robin Morgan, and Gloria Steinem to make women visible and powerful in media, published a user-guide for members of the media to help them identify sexism and stories biased against women so that sexism doesn’t remain a barrier for women elected to office. The glossary at the end of the document is an especially interesting read.

The WMC research shows that sexist media coverage results in a drastic decrease of voter confidence in women candidates. This is similar to studies of bullying, in which people are less likely to identify with those negatively treated in public, due to the conscious or unconscious fear that such bullying or negative public characterization will then include them as bystanders and supporters. The ever-changing media landscape creates an unmonitored and often not fact-checked echo chamber, habitually allowing damaging comments to influence opinion without accountability. Name It. Change It. was launched to hold media outlets accountable for their role in our government’s gender disparity; women make up only 17 percent of Congress and 23 percent of state legislatures. Name It. Change It. identifies and publicizes sexist media coverage of women candidates and political leaders of all races. This project is also race-conscious in its understanding of stereotyping as it is used against various groups of women.

The Pantene ad below illustrates how women typically apologize for situations where they should not be sorry. The 2nd video, hits it out of the ballpark, with Amy Schumer's parody of women apologizing for... you know.... existing.

Are you sorry? Next time you apologize, ask yourself what you are apologizing for, then consciously think of a different way you will approach that same situation next time. Because it will come up again, you can be sure of that.