Dear PLN, Have I Ever Told You How Much I Love You?


I mean, here I am preparing for another segment on The Palm Breeze CAFE. This segment will be like my other segments (like this one I did on Tadalist.com) where I showcase a nifty Web 2.0 tool that has educational & community value. So, this week I'm planning to show Polleverywhere.com which is an awesome site for creating polls. It's not as meaningful to show a poll where there's no data, so I decided to create two kinds of polls and to invite my Twitter and Plurk friends to help me out. So I sent out two quick (140 character) pleas to vote (1 in Plurk and 1 in Twitter).

One poll I'm going to show is a basic multiple choice poll that you can use if, for example, you wanted to organize a sports team party. I created a sample and here's how the voting went: 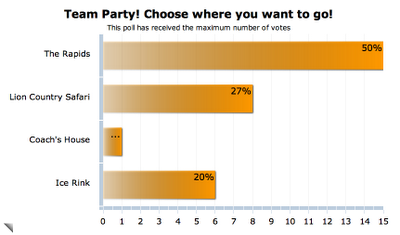 The 2nd poll was will be an open response poll, so I asked "What's Your Favorite Web 2.0 Tool?" (I thought while I was asking my Web 2.0 friends to respond, I'd at least have something of value to share with them afterward.} Below is a screenshot of the partial list. The full list doesn't show up on screen all at once (but it is VERY cool how they bounce in as they come in dynamically as people vote), so I listed all of the responses below the screenshot. 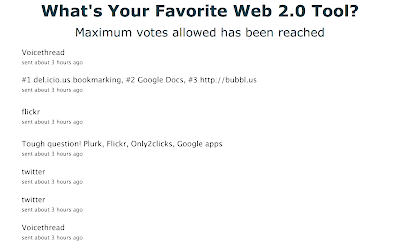 Then of course, they pull the hook.

I don't plan to upgrade, 30 is fine, but honestly, I'm touched that you, my PLN, are so giving and generous and willing to help me out and SO quickly! I even received Tweets and Plurks from others who said they tried to vote but the poll was closed.

So, what did I learn?

Well PLN, thanks for stepping up when I need you and thanks for visiting my blog. You're awesome!

I have found support from Twitter and Plurk that I've never found anywhere else in teaching for 29 years. Anyone who does not have some form of PLN is really lacking something important. I wish I had known about this when I was in the classroom and I'm thrilled to see people sharing information like this in schools. Thanks for all that you do!

Thanks for your post. Not to change the subject, but I didn't know a bout the Palm Tree Cafe. It looks great. Thanks again.

....and we love you, too! I don't know what I would do without my Plurk and Twitter buddies now. They are so much a part of my life and professional development. I am constantly learning, adapting, and changing the way I bring information to my children because of them. Thanks everyone!

Thanks for commenting, Guys! See what I mean? :)

I happened to run across your blog. Looks like your a high-tech teacher! :-) Lots of interesting information. My wife, Tanda, teaches here in Maryland.

@shayne
Thanks for visiting my blog.