Happy Birthday, Dr. Seuss! And by the way, thanks for the interesting ideas.
And while I've got you, how did you know how strongly you were influencing the adults by hooking in the kids?

For most of his long career Ted Geisel (Dr. Seuss and Theodore or Theo LeSieg... Geisel backwards) wrote hugely popular children's books. Early in his career he wrote for humor magazines and made money in advertising. Often forgotten, is that for a brief time in the 1940s he was in the US Army making propaganda training films.

As World War II began, Dr. Seuss turned to political cartoons, drawing over 400 in two years as editorial cartoonist for the daily newspaper, PM. Dr. Seuss's political cartoons opposed the viciousness of Hitler and Mussolini and were highly critical of isolationists, most notably Charles Lindbergh, who opposed American entry into the war. Some cartoons depicted all Japanese Americans as latent traitors or fifth-columnists, while at the same time other cartoons deplored the racism at home against Jews and blacks that harmed the war effort. His cartoons were strongly supportive of President Roosevelt's conduct of the war, combining the usual exhortations to ration and contribute to the war effort with frequent attacks on Congress (especially the Republican Party), parts of the press (such as the New York Daily News and Chicago Tribune), and others for criticism of Roosevelt, criticism of aid to the Soviet Union, investigation of suspected Communists, and other offenses that he depicted as leading to disunity and helping the Nazis, intentionally or inadvertently. In 1942, Dr. Seuss turned his energies to direct support of the U.S. war effort. First, he worked drawing posters for the Treasury Department and the War Production Board.

Lt. Col. Geisel's most famous contribution to the war effort was the creation of the character Private Snafu, (Snafu is a military acronym standing for "Situation Normal- All F****d Up.") Private Snafu was a hapless, clumsy and easily misled recruit. He 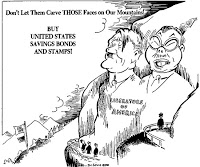 starred in a series of hugely entertaining training films shown to soldiers. Because the soldiers were adults, the cartoons are sexier than those seen in movie theaters. They are also full of racism. A sign of, not only the times, but also the methods for influencing the soldiers.

Interesting how movies were used to influence others even back then. Is this a coincidence? The cost of an average 30-second Super Bowl commercial is $2.5 million. Is there a good reason that companies are willing to spend so much money on 30 seconds?

What does that tell us about the influence teachers have over their students' learning?