Time Magazine and I don't always agree but this time, they were right on! The Time Magazine 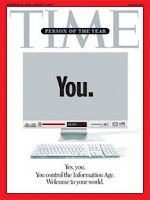 Person Of The Year title is "awarded" to someone (or something, for example in 1983, the title was given to the Personal Computer) that has the most influence on the world news that year. Not always an honor, the title has been shared by good and evil (Charles Lindbergh, Franklin Delano Roosevelt (3 times), Ayatullah Khomeini, Ted Turner, Albert Einstein, and Hitler, for example).This year, the title goes to the person who has had the most influence over the news media and will ultimately determine the direction of user-driven content (read: news) for the future, YOU! This is especially true in the world of education. The students are the "You's" of our classroom. Students are engaged in an underworld community that we constantly try to block. We keep trying to pull our students away from what makes them natural communicators and learners and although, a few will comply, many if not most are being left behind.

This is our wake-up call! Our students are no longer just consumers of information, but active creators as well. Take a look at MySpace, YouTube, Blogger, Wikipedia, and iTunes Podcasts, to name a few. A few weeks ago, my family and I were sitting in a restaurant having dinner. During the conversation, my older son kept looking at his cell phone. He'd hit a few keys and then return to our conversation. I finally said to him, "Do you have to text message your friends while we are in a restaurant?" and this is what he said to me, "Mom, do I have to hide it from you just like I do my teachers at school?"

America loves its solitary geniuses—its Einsteins, its Edisons, its Jobses—but those lonely dreamers may have to learn to play with others. Car companies are running open design contests. Reuters is carrying blog postings alongside its regular news feed. Microsoft is working overtime to fend off user-created Linux. We're looking at an explosion of productivity and innovation, and it's just getting started, as millions of minds that would otherwise have drowned in obscurity get backhauled into the global intellectual economy.

And what did I respond to my son? I said, "huh!" And we continued on with our single layer conversation, as he continued on talking to us and 4 of his friends. Hey, we didn't even have to buy them dinner! Not a bad deal.

Lee,
I really enjoyed your blog but the survey on the first entry was a little too much for a work computer. We need to chat about the future of DEN. I hope all is well and I enjoyed meeting you in Deerfield Beach at the beginning of the month.
Debbie Bohanan

So it really is all about me. I mean, us.

Not sure what survey you mean, Debbie. It was wonderful working with you on the DEN Advisory Board. I do hope we will chat again soon. Happy Holidays.