I read this in David Warlick's blog today. David referred to Brian Crosby's blog, Learning is Messy, where he advocates for teaching students how to ethically, safely and appropriately use the Internet, rather than cut them off from it simply because it poses possible dangers. What a great example of how we, as parents, educators, administrators (basically the Kid Control - or so we think) will so easily give in to what is easiest and most comfortable and politically correct instead of rationally considering, and yes... thinking out of the box, about how to make what looks like a rough road, valuable to ride on. There are lots of examples included on how we already do this with other IODs (Instruments of Destruction):

Paper and pencils can be used to draw inappropriate, hate filled, pictures messages and ideas - and you could poke someone’s eye out. They could even be used to lure your child into a dangerous situation. Should we (and could we if we tried?) cut off access to keep our children safe? No, because they are everywhere and too valuable in so many ways – so as parents and educators we monitor and teach ethical, appropriate, safe use.

Over 200,000 children are injured using playground equipment each year – some are killed. Should we (and could we if we tried?) cut access to playground equipment to keep our children safe? No, because they’re eventually going to find play equipment and playing is too valuable an experience – so as parents and educators we monitor and teach ethical, appropriate, safe use.

Reminds me of about 20 years ago, one of my first grade students was on the (metal) swings and decided to fly off at a particularly high moment. She caught her arm in the metal chain of the swing and tore a pretty yucky hole in her arm. I watched the whole thing as if it were in slow motion. I was already yelling for her to stop (I could tell by the momentum she was building and the look of anticipation in her face, what she was planning). Too late! 15 stitches later and a few phone calls from her parents and that swingset became the forbidden IOD on that playground. Kids had to not only avoid the swing area, but at times the swings were actually wrapped around the top cross-bar to avoid any (heaven forbid) unauthorized use of them! Pretty soon it joined the "vomit machine" in the great playground graveyard!

Now, if you look around at new playgrounds being built, they don't quite look like the ones we

grew up with. They are molded shapes and soft curves of bright colors. There's large holes to climb through (yippee) and maybe two carefully molded steps that lead to a platform of nothingness. Oh yeah, there's also the TicTacToe spinning-cubes-thing. I think I saw a student use those once, but only to see how fast he could make them spin. 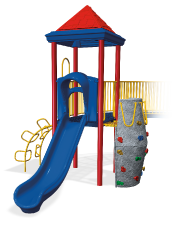 So, we've sterilized our playgrounds and kids are now missing out on not only learning about basic physics, but also how many spins it takes to make you dizzy, how school pizza looks on the ground after it's been partially digested, how far a lugie can fly when launched from a particular position while swinging, what the sky looks like upside down when you swing with your back arched all the way, how you can pretend you are flying if you put your stomache on the swing seat and swing that way, not to mention the conversations little kids have with eachother as they are trying to synchronize their swings!

It makes me sad to see how we make accomodations to such extremes just so we can avoid having to teach them those lessons. See, no swings on the playground means they don't have to be taught how to judge distance and not to walk in front or in back of a swinger, or not to fly off the swing before releasing your arms, or not to eat school pizza right before recess.

Let's not sterilize our kids' academic learning environment too. Teach the students to make good decisions! Teach them to have good judgement! Teach them to weed out the bad, the unusable, the irrelevant, the inappropriate! Why are teachers so afraid to teach?