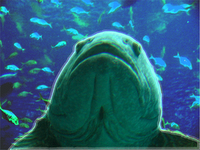 At the DEN RI we talked about the very cool tools you can use in Photoshop to enhance your images. I took this pic at the Georgia Aquarium and used a couple of tools to enhance the image. First I used the Magnetic Lasso to select the big fish and increased the brightness, added a 10 pixel border and added a glow, playing around with the colors a bit. Then a chose INVERT so that everything outside the fish was selected. Here, I increased the blue tones on everything outside the big fish. Then I used the Magic Wand (holding SHIFT) to 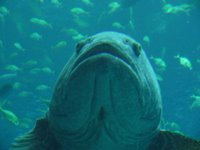 select only the small fish I wanted. I increased the brightness and blue levels, then added a smaller border with a glow. It's not terribly creative but I think this pic is more interesting than the original.

I think it is more interesting. You just can't believe anything you see anymore!