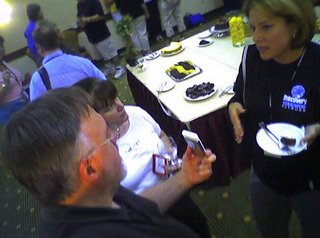 My first day at the Discovery Educator's SouthEast Regional Institute has left me with some interesting things to think about. After some housekeeping and introductions, we were left to mingle with the many excited and enthusiastic DEN members who are here to participate in this exciting event. I already know of a few people whose brains I'd like to pick some more about how things are done in their districts. Although I knew he was going to be attending at some point, I didn't realize that David Warlick was already in the room, recording his conversations with us (for a future podcast, I can guess) and snapping photos with his phone. Not 5 minutes after I left David, I checked out his weblog and there we were... he had uploaded his pictures to his Flickr account, all while we were discussing what it might take to motivate teachers to move into the 21st century! We were discussing what "things" students need to learn in the environment that matches their culture: voice recorders, video cameras, software, MP3 players, weblogs, etc. David said something very interesting... he asked why we don't just stop fighting it and give each student a laptop! A laptop can hold all the tools students need, and then some! Good question! Why don't we just do that?

Tomorrow, we head to Georgia Public Broadcasting where we will embark on a collaborative learning adventure with not only David Warlick as he talks about "reinventing literacy" and "web 2.0", but also Hall Davidson. Check out David's blog on using podcasts in education. denri
denri06

I'm jealous...I'll have to live vicariously through you!
"S"

Relax, Death is comming fast, enjoy now, cause tomorrow your eye brows will me dust.