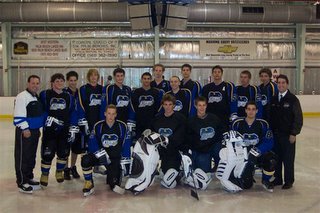 Well, they lost all their games but put up a good fight. The boys had a great time playing their hardest (most of the time), rolling in the snow, and skating on the Rideau Canal. It finally opened yesterday and it was truly an amazing sight! My husband and I actually walked on the canal as the kids were skating on the same ice. They were able to skate under bridges and along buildings and only when the ice started getting choppy, out of fear of ruining their blades, the kids finally came back. It was about 20 degrees (c) below zero on the canal and even with all the layers of clothing, it was damn cold! There were buildings placed on the canal for skate rentals, changing areas, drinks and food. The only food worth trying on the canal was the "Beaver's Tail." A fried dough with sugar and cinnamon. It was very tasty, if you didn't worry too much about the fact that it was fried. Speaking of clogged arteries, the big food here is Putine. Putine is french fries with beef gravy and cheese curd poured all over it. Believe it or not, it is also very tasty! Why do the best tasting things in life have also be the worst for you? Anyway, any time of day (and I do mean ANY time...like first thing in the morning with coffee) you can see locals eating Putine.

On our last full day, today, we watched the AA Midget championship game. It was a great game that was 0-0 until the 3rd period. The final score was 3-1 including an empty netter with Sherbrooke ultimately winning. The New Brunswick team was also a great team but just weren't as strong. At this level, it seems strength, body weight, height count for as much as, if not more than, skill. The disappointment on their faces as the audio played Queen's "We Are The Champion," and the other team skated in circles holding their trophy proudly, made me (literally) cry. The stands were full of many more people than were obviously parents of the players. This Midget tournament is a huge event that has occurred for the last 41 years. Lots of locals look forward to watching these games, even without family members involved. They have huge banners hanging there commemorating Junior level players who also played at the arena who also made it to the NHL. Luc Robitaille, Jose Theodore, Pat Burns, and Peter Worrell were listed, to name a few.

One thing is for sure, Canada takes their hockey VERY seriously.

The photo here is of young men.

Yes, it's incredibly hard to believe how fast he's grown up! Especially since he still likes to whine, eat candy and play X-Box!