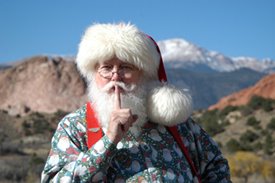 If you've never had the fun of logging on to the NORAD site to "track" Santa's progress, you simply must! It's one of my favorite things to do every Christmas Eve with my kids. NORAD only opens this site once a year. It's also a great opportunity to get in some geography lessons without the kids realizing they're actually getting smarter.

What is NORAD?
NORAD is the bi-national U.S.-Canadian military organization responsible for the aerospace defense of the United States and Canada. NORAD was created by a 1958 agreement between Canada and the United States.

How does NORAD do it?
"NORAD uses four high-tech systems to track Santa - radar, satellites, Santa Cams and jet fighter aircraft. It all starts with the NORAD radar system called the North Warning System. This powerful radar system has 47 installations strung across Canada's North and Alaska. NORAD makes a point of checking the radar closely for indications of Santa Claus leaving the North Pole on Christmas Eve. The moment our radar tells us that Santa has lifted off, we begin to use the same satellites that we use in providing warning of possible missile launches aimed at North America. These satellites are located in a geo-synchronous orbit (that's a cool phrase meaning that the satellite is always fixed over the same spot on the Earth) at 22,300 miles above the Earth. The satellites have infrared sensors, meaning they can see heat. When a rocket or missile is launched, a tremendous amount of heat is produced - enough for the satellites to see them. Rudolph's nose gives off an infrared signature similar to a missile launch. The satellites can detect Rudolph's bright red nose with practically no problem. With so many years of experience, NORAD has become good at tracking aircraft entering North America, detecting worldwide missile launches and tracking the progress of Santa, thanks to Rudolph. The third system we use is the Santa Cam. We began using it in 1998 - the year we put our Santa Tracking program on the Internet. NORAD Santa Cams are ultra-cool high-tech high-speed digital cameras that are pre-positioned at many places around the world. NORAD only uses these cameras once a year - Christmas Eve. We turn the cameras on about one hour before Santa enters a country then switch them off after we capture images of him and the Reindeer. We immediately download the images on to our web site for people around the world see. Santa Cams produce both video and still images. The last system we use is the NORAD jet fighter. Canadian NORAD fighter pilots, flying the CF-18, take off out of Newfoundland to intercept and welcome Santa to North America. Then at numerous locations in Canada other CF-18 fighter pilots escort Santa, while in the United States American NORAD fighter pilots in either the F-15 or F-16 get the thrill of flying with Santa and the famous Reindeer Dasher, Dancer, Prancer, Vixen, Comet, Cupid, Donner, Blitzen and Rudolph. About a dozen NORAD fighters in Canada and the United States are equipped with Santa Cams."

Merry Christmas to all and to all a good night!