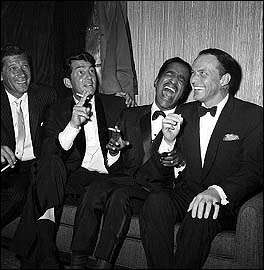 The photo of the illustrator for the children's book, "Goodnight Moon" has always shown him holding a cigarette... until now. Harper-Collins Publishers have digitally removed the cigarette from the newest edition of the book. Apparently it sends a harmful message to young children and doesn't need to be there.

So, let's rewrite history on lots of other things while we're at it. How about those old pictures of Dean Martin and Sammy Davis Jr. smoking. Yeah, it was definitely a big part of who they were, but it sends a bad message. How about some Christmas carols that use the word "gay" to mean "happy." Let's just rewrite those parts and insert what we really mean there, shall we, and stop the kids from snickering everytime we get to those parts of the songs. No more singing "Puff, The Magic Dragon," or "Lucy In The Sky With Diamonds," or "Needle and Damage Done" either. Those are, of course, gateway songs.

Can't really blame the publishers, I suppose. They are just trying to make a buck. The problem is Us, the consumers, who are constantly on watch to avoid offending and to avoid having to engage in actual dialogue with our kids. Heaven forbid, we leave history intact and instead of white-washing it, we embrace it and learn from it. Why not just allow history, however distasteful, to teach us how to behave today and in the future?