More About My Trip Down Memory Lane 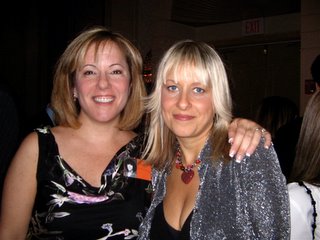 The days since my last post have blown by so fast. I'm glad to finally have a chance to write about "The Reunion." All the pics are finally posted at the link in the title, so do check them out. The reunion was a lot of fun mostly because there were people there I didn't even know I remembered. I seem to have few memories of high school, although I do remember my HS crush and he was there! I even admitted my crush to him right in front of his wife. Hey, that's what reunions are for, right? Most of my memories are from my elementary years at North Main Street School, which has since been converted to Rockland Community College. There was one particular lady there, Karen, that I was pleasantly surprised to see that I not only remembered, but remembered being very close to as a very young girl. So, it was fun chatting with her and reminiscing about our sleepovers and our neighborhood. If they were to give out an award for "looks most like she did in HS," Karen definitely would have won! Still georgous and married to the boy she dated back then, too.


What HS memories I do have are all centered around hanging with my best friends, Missy and Debbie. Missy didn't make it to the reunion, but we keep in touch anyway. Debbie and I have kept in touch on and off through email. The absolute BEST part of the reunion was seeing Debbie! (That's me and Debbie in the photo) It's funny how you can not see someone in 25 years and still fit right back into that comfortable spot you had in each other's hearts.


As for the other people at the reunion, let's just say that personalities don't really change. The outgoing class "PR" person was still doing his thing, the mean popular girl was still giving out her false smiles, and the prettiest girl in the class was still the lovliest woman there (the bitch).


I did meet someone there that I didn't even know in HS and I ended up spending the next few days with her in NYC. Joyce was a lot of fun and totally patient with me as she ignored my neurosis about getting around in such a strange city.


As for me, I competed with the black men there for who had the largest afro back then. (If you look closely at the photo above, you can see my HS pic - 'fro and all - on my nametag.) They wanted to give me my own category, but I wouldn't have it. Although I did allow them the "natural" category. Afterall, the reason for my 'fro was the (gasp) perm that I then picked out to perfection every day. People made nice comments about how I looked much better now than I did then. I didn't feel particularly pretty but I haven't felt very attractive in quite a few years anyway, so I'm at peace with that.


At one point, Debbie said she couldn't wait for the part where they show who has died since high school. I thought it was odd that she said that, but she explained that it was sort of an emotional release she was looking forward to. Kind of like the montage at the end of the olympics. I smiled, hugged her and told her how that was such a "Debbie" thing to say. She was right. She was always good for saying what others would only think. We were all looking forward to it. We were hoping we wouldn't know any of the people shown. Hoping we couldn't relate and then sort of silent after that part, allowing it to sink in that the next time we meet, there will probably be one or more added on.


On the plane ride home, while my sister slept, I reflected on how far I've come, emotionally. Even 5 years ago, I never would have taken a trip like this for fear of ... well ... everything. Maybe that's what happens when you hit your 40's, you either just don't give a shit anymore or somehow peace finds you.